I arrived in Rome on April 30th, six days before Dario Girolami’s Mountain Seat Ceremony to become Abbot of Centro Zen l’Arco or Zenmon-ji, where he has been the guiding teacher. I brought with me the 11-jo ceremonial robe I had sewn for the occasion. Dario is my dharma brother, both of us students of Eijun Linda Cutts. We have been addressing one another as “dear dharma sister,” “dear dharma brother” for over ten years, since we met at a Green Gulch Farm practice period.Although Dario had invited me to visit him in Rome many times, this was my first trip.

Dario had arranged for two students from his sangha to meet me at the airport and accompany me to the apartment where I stayed for my week in Rome, as the person who was hosting me, didn’t speak English. From the moment I met Susanna and Francesca, I felt the warmth and caring attention I experienced all week during the rehearsals and preparations for Dario’s ceremony. Rehearsals, guided by Steve Weintraub and Linda, who had arrived in Rome a few days before me, were held either between 7 – 9 a.m. or 9 – 11 p.m., as most sangha members worked during the day. With each rehearsal, we all became more familiar with the intricate choreography and sequencing of the ceremony, and how each of our parts related to the others. Tenshin Reb Anderson arrived near the end of the week and participated in the ceremony as the embodiment of Manjushri, Bodhisattva of Wisdom.

The Mountain Seat ceremony was held in the zendo on Sunday, May 5th. About 40 people attended, including representatives of the European Buddhist Union, a local interfaith group, as well as Rev. Yusho Sasaki, Director of the Soto Zen Buddhism Europe office, family members and friends. The ceremony flowed beautifully in two languages, Italian and English. Dario’s statements included references to the history and literature of Rome. The last congratulatory statement was offered in the form of sacred Indian dance by Dario’s wife Annalisa Migliorini. We shared a feast afterwards with food prepared by members of the sangha. 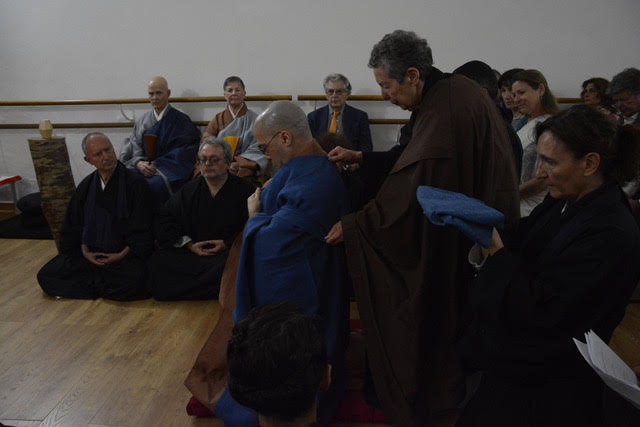 Dario Girolami receives his ceremonial robe at his Mountain Seat Ceremoney at the Centro Zen l’Arco in May, 2019

The next day, the last in Rome for me, Linda and Steve, and Reb and his wife Rusa, was spent with Dario and Annalisa, walking through curving streets, climbing one of Rome’s seven hills for a view of the Tevere river and the curved dome of St. Paul’s Cathedral, visiting a church with Michelangelo’s statue of Moses, stopping for lunch and gelato. I was happy to be with three generations of my dharma family, as Reb is Linda’s teacher, and thus “dharma grandfather” to me and Dario.

When Susanna dropped me off at the airport I felt the warmth and love of the sangha once again. I wondered at the sense of belonging I had experienced with people I barely knew because of our shared love of Zen practice, of the forms that are hard to master, the elusiveness and mystery of the teachings that cause us to be upright, loving, cooperative, generous, connected.

This wonder arose again in Belfast, where I visited Black Mountain Zen Center and stayed with Djinn Gallagher and her husband, Richard Larson. Djinn, a student of Paul Haller, trained for several years at Tassajara and City Center, where we practiced together. She has been the resident teacher at Black Mountain Zen Center for nearly three years. Djinn had invited me to give a dharma talk and a workshop during my stay in Belfast, and had arranged for me to meet staff members of the Belfast LGBT Centre and offer a workshop for women who had experienced violence. I arrived knowing very little about the history of Ireland and Northern Ireland, and had some trepidation about teaching there, as I was afraid that, due to my ignorance, I would say something hurtful or offensive.

After the Saturday morning sitting Djinn leads a book group for sangha members. The week I was there they were beginning Pema Chodron’s When Things Fall Apart, which starts with a chapter on facing our fear. We broke into small groups and I was able to talk about my fear of giving the dharma talk the next day and of leading the workshops we had planned.

A few weeks before my visit to Belfast I had read of the shooting of a 29 year-old Irish journalist, Lyra McKee, at a demonstration in Derry. This was a tragic loss for all who knew her, including people I met at the LGBT Centre. Lyra had come out as a lesbian as a teenager, was bullied, rejected by family members, and years later had written a widely shared letter to younger LGBTQ+ people to encourage them to live their lives fully and openly. My last day in Belfast Djinn showed me a street mural of a life size image of Lyra with her words: “It won’t always be like this. It’s going to get better.”

This is an inspiring message for me, coming back to the U.S. in these challenging times, more aware of the rise of the conservatives and fascists in Italy, Australia, Brazil, Mexico, and elsewhere around the world, as well as the political battles in our own country — and knowing there are people in all of these countries who are working to meet hatred with love, narrowness with breadth of understanding, fear with compassion.

I saw how the sanghas in Rome and Belfast made a difference in the lives of their members, who bring to their varied jobs, their families and communities the qualities they cultivate through their Zen practice.