Today’s debt crisis is vividly apparent in Monastiraki Square, where young Greek men breakdance daringly in the hope of collecting some spare change from tourists. The youth unemployment rate is at nearly 48 percent, yet their dance is not just an expression of their straitened circumstances—it is also the postmodern play of satyrs, one with an oddball humor that seems in open revolt against the inevitable. With their forceful performance, the men seem to be proclaiming: “Sure, everything’s going downhill here, but we’re alive, we’re laughing. Let’s enjoy that!

I set out for the Athens Zen Center just a few streets away. I pass shuttered stores and once-beautiful houses from the 19th century that are falling apart, their facades now used as canvases by graffiti artists. Scattered among the dilapidated structures are rather unsightly concrete buildings from the 1980s and 1990s that appear older than some of the ruins nearby.

Yet in the midst of this urban crisis, the decaying city is reinventing itself. Improvised art galleries are popping up in abandoned spaces. Young people are opening cafés where chain-smoking patrons loudly discuss current events and laugh and flirt. The Zen center is situated above just such a café, in the heart of a city. It’s a lively site where people learn martial arts and practice Zen.

From the very first day I’ve been fascinated by the kindness, individuality, humor, lust for life, and gentle optimism of the people I met there. And yet, every single life is part of the crisis that was unthinkable just a decade ago.

What can you do when there is nothing left to do? This question could be asked by most of the Zen practitioners I have gotten to know in Athens. What can you do when in the last eight years your parents’ monthly pension has been cut to $400 from $1,500 and is now being cut in half again? What can you, a 21-year-old, do when you are told the hospital will probably not be able to purchase your HIV medication abroad due to Greece’s capital controls, and no one in the county produces it? What can you, a public servant, do when you are laid off and then denied unemployment benefits because public servants cannot be laid off, a situation worthy of Kafka?

According to Zen teacher Bernie Glassman, there is something we can do when there is nothing left to do: bear witness. The practice of Zen meditation is also a form of bearing witness. We sit quietly in the midst of our experience and try to hold on to nothing, reject nothing, and simply observe what is there. In our retreats in Greece, these periods of sitting zazen alternate with periods of intense listening and active participation.

Interestingly enough, in many cases a wide space opens where new things can arise: long forgotten feelings of receptivity and ease that transcend the often burdensome feelings of everyday life, or creative impulses in response to impossible situations. And when we bear witness to our experience in absolute silence, it becomes increasingly clear that we do not have to identify with what we perceive.

Yes, there is a crisis taking place, and in human terms it’s a catastrophe. Yet life’s basic elements— earth, air, water, and temperature—remain untouched by the crisis; they are always there as a sort of consolation or reminder that everything is shifting and we do not know what will be one moment from now. Yes, everything flows, everything is in flux—something taught by the pre-Socratic philosopher Heraclitus at the same time the Buddha was sharing his insights. When we entrust ourselves to the course of events, we do not gain stability or certainty. We are touched by life as it is—by its tenderness and vulnerability, by the love it awakens. Maybe that is enough. Near the Athens Zen Center there is a phrase scrawled on a wall: “Frau Merkel, you can take everything from us, but not our nice weather.” Isn’t that a cause for hope?

What follows are insights shared by four Zen students in Athens.

How had your life changed as the crisis in Greece has unfolded? 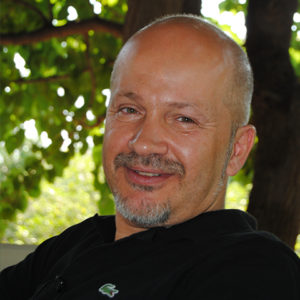 Panayotis Panayotidis, 50, writer and administrator: I had to sell my business and have been employed on and off for the last five years. When I have a job I feel gratitude, and when I don’t I still feel grateful for the roof over my head, the food I have, my friends, and my family. I am single and have colleagues who are in a much worse situation because they have spouses who lost their jobs and children to take care of.

Manolis Illiakis, 43, architect: Several fears arise in everyday life. I have recurring worries about the future and my family. It’s not easy to make clear-cut decisions in such a fluctuating, unstable situation. As an architect I haven’t had any commissions for three years now. I have to find a new profession.

What does Zen practice give you in times when so many things—at least in the outside world—are falling apart?

Panayotis Panayotidis: Zen practice helps me stay in the moment. Throughout the day I often pause and simply become attentive. I breathe and try to maintain an upright position in life. The people I practice with give me the strength to refocus and to practice compassion, giving, and gratitude.

Panayotis Panayotidis: Basically, I just live day by day. Sometimes I think this economic situation will last forever and I find myself getting depressed. It paralyzes me. But then, step by step, I accept things the way they are. I try to become aware of all the things to be grateful for. I see all that I have and never really valued, things I constantly took for granted. I tell my fears “you’re not real” and I tell myself “this too shall pass.” Since good things don’t last forever, the same holds for bad things. I hope things won’t get worse. I want my country to regain its dignity. I feel sadness and compassion when I watch well-dressed men and women digging in garbage cans. What I would like is for the next generation to rediscover their hopes and dreams.

Manolis Illiakis: I mainly have fears of the economy and of getting sick. I try not to analyze them. I don’t try to manipulate them, thereby rejecting them. Instead, I try to see them as good friends. My hope is not to have hopes.

What do you rely on in these uncertain times, which seem to be getting only worse?

Panayotis Panayotidis: I try to focus on the positive aspects of the crisis. People are growing closer together. Pride is losing its glamour. I recently read that a Bavarian aristocrat raised €385,000 to donate to the refugees on the Greek islands. Life recycles itself and by practicing openness you can realize that refugees are part of the same whole.

Manolis Illiakis: An empty heart relinquishes fear. As with the sun, which shines on young leaves and nurtures them, the heart allows anything and rears everything. The heart that sees through evanescence becomes empty. 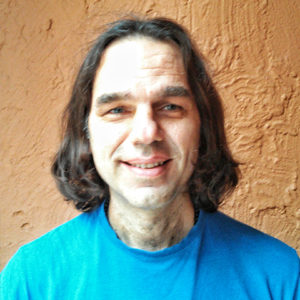 Harris Mitsouras, 48, civil servant: We were supposed to live like “brothers and sisters” according to the ideals of the European Union. Instead, the only thing I hear in the media is that northern Europe thinks “the Greeks are lazy.” I see freedom and kindness in our society crumble away day by day.

However, as Martin Luther King said: “I have a dream.” I still have a dharma dream. To put it in Dogen’s words, my dream is that one day we will all be able “to take a step back and thus reverse the activity of the mind that seeks happiness outside. That we’ll be able to turn our light inwards and illuminate our true face.” In my opinion, our true face is everyone’s face: I am the Syrian refugee, I am the killer, I am the shepherd in the mountains, I am the dog that dies alone in the streets.

Deep inside everyone’s heart lies what the Buddha called “basic goodness.” Nobody wants to hurt anyone else on purpose. He or she just seeks his or her happiness through “right” or “wrong” measures. When I sit still and am quiet, I can somehow perceive this knowledge deep inside my heart. Then I can forgive myself for the pain I’ve caused others willingly or unwillingly and I can, to some degree, forgive others.

In Greek “to forgive” means “to give space.” To have the courage to be familiar with the small child in me that cries for its toys (hopes) and to be familiar with my father’s voice admonishing me (fears). When everything seems to be falling apart, Zen gives me the chance to enjoy a good cup of coffee. After all I am a Greek! May all of us live like brothers and sisters. May all of us find happiness and the causes of happiness.

Soto Zafira, 40, jewelry designer: The saddest facet of the so-called crisis is that it somehow forces you to feel Greek. That’s sad because although we have the means and the knowledge to think deeply—transcending borders and apparent separateness—our mind constantly relapses back into the separation of being Greek, German, French . . .

While most of us think we are studying dharma and have integrated it into our life, the reality is that when real life knocks on our door and confronts us with problems we escape through the next window to spend time with our (dharma) hobby.

As Western societies we consider it our legitimate right to exhaust this planet’s energy sources and create more and more garbage. The truth is: The sky of life will always create clouds. Instead of viewing them as potential thunderstorms, why don’t we understand them as “adornments in our sunset”?

More information is available at www.akazienzendo.de