Last November a number of people gathered in the Green Gulch Farm garden to dedicate a new Jizo garden, and to honor Yvonne Rand for her decades of influential, formative practice at San Francisco Zen Center and for her development of the practice of Jizo ceremonies. Many people were present—many who have known and been influenced by Yvonne Rand as well as many who have taken part in and benefited from the Jizo Garden and the Jizo Ceremonies for Children and Those Who Have Died. Yvonne was present and spoke at this moving ceremony. 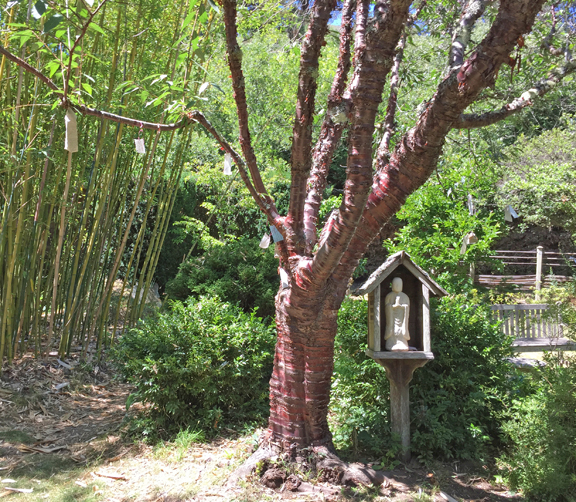 Here are stories about Jizo, the Bodhisattva who is especially known to protect children, women, and travelers; stories of the Jizo Garden; and stories of Yvonne Rand, written by Wendy Johnson, also a decades-long practitioner and co-founder of the Green Gulch garden, and Chris Fortin,who continues to perform Jizo ceremonies regularly and to teach the practice to others. Included is Yvonne’s own story of her history with Jizo practice, which she wrote in 2002.

The organic garden at Green Gulch Farm was established in the early 1980s, following the dragon veins of original practice at San Francisco Zen Center. From the very beginning of the garden, Yvonne Rand was involved in the creation of a vibrant program of applied Zen meditation, organized to meet the needs of the extended community. Along with Virginia Baker and Skip Kimura, Yvonne helped to influence not only the landscape design of the Green Gulch garden, but also the deeper pattern of engaged practice. Understanding that every true garden is “a ground plot for the mind,” Yvonne combined the opportunity for engaged outdoor meditation and repose with meaningful ceremony and celebration.

I worked and practiced closely with Yvonne Rand in the formative seasons of the Green Gulch garden. I remember well when she and her husband, Bill Sterling, helped to establish Friends of Green Gulch Garden (FOGGG), an organization of neighbors and friends contributing to the ongoing support of the garden and its fledgling programs. During these early years Yvonne helped organize wedding and memorial ceremonies, which she convened in the heart of the garden. She often referred to herself as a Zen householder priest. For some years she served on the AIDS Interfaith Council, leading outdoor meditation and memorial services at Green Gulch four times a year for people with AIDS and their families and friends.

Inspired by her lively Buddhist scholarship and pilgrimage to Japan, Yvonne developed a practice of offering regular Jizo ceremonies to honor children who had died and to support their families. These early ceremonies were held in the garden where Yvonne and Bill had donated a few beautiful Jizo figures for solace and inspiration. It was my privilege to attend and assist Yvonne in these early Jizo ceremonies held in the garden. Standing at our outdoor altar, she welcomed and greeted participants, setting the tone and intention for the ceremony. Yvonne was direct and clear about the history and relevance of the Jizo ceremony. The provided ballast and context for our gatherings. We began by sitting in silence and proceeded to each sew a bright red bib or traveling hat to festoon the various Jizo figures throughout the garden. After the sewing, each participant had an opportunity to speak directly to the child being honored. I was consistently moved by Yvonne’s presence and practice during these often emotional ceremonies, and by her empathy and capacity to engage a grieving community.

Over the years the Jizo ceremony has evolved and deepened. I watched with respect as Yvonne shared her training with other Zen teachers eager to engage in Jizo practice. In particular I remember Zen priest and physician Jan Chozen Bays, Roshi, working closely with Yvonne to learn and adapt the Jizo ceremony in both her medical and meditation practice. The lovely clay Jizo figure sitting with a baby in her lap in the farm greenhouse was a gift fashioned by Roshi Bays and donated to Green Gulch Farm. 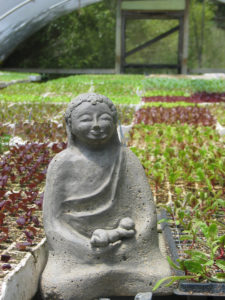 With the dedication of the Jizo garden at Green Gulch Farm on Saturday, November 11, 2017, we honored decades of intention and practice generated by Zen priest and teacher Yvonne Rand. This renewed garden is an expression of continuity and growth of dharma practice, now passed on by Yvonne to the next generation of cloud and water wanderers and teachers who continue to offer the Jizo ceremony for all beings in the ten directions.

Jizo Bodhisattva is one of the most beloved figures of Japanese Buddhism. “Jizo” is this bodhisattva’s Japanese name. In Sanskrit it is“Ksitigarbha” and in English “Earth Treasury” or “Earth Womb.” Jizo’s vow is to fearlessly bring all beings out of all realms of suffering. Embodying love, connection, and nourishment, Jizo moves freely and unhindered in protecting and guiding the deceased, comforting the afflicted, and aiding those who face danger or hardship. This simple and humble monk is especially known to protect children, women, and travelers. Jizo especially bears witness in the hell realms and testifies, despite dread and grief, to these horrors. With wholehearted devotion, Jizo sets all beings on the path of full awakening.

The Jizo Ceremony for Children and Those Who Have Died was first adapted and offered in the U.S. by Yvonne Rand, who began practicing with Shunryu Suzuki at the San Francisco Zen Center in 1966. She loved and devoted herself to supporting him as he brought Buddhist practice to America. She later became a Dharma heir of the late Dainin Katagiri. Since then, this ceremony has been evolving as a way to meet grief, and as an intimate offering and expression of Zen for the extended community. Many people, Zen practitioners and those from diverse denominations, have been impacted by this ceremony and its capacity to intimately meet grief, both of children and loved ones who have died.

On November 11, 2017, we dedicated the Jizo Garden in honor of Yvonne in the Green Gulch Garden. Yvonne held a long time dream that there be a Jizo Garden in the Bay Area to receive and shelter those who have lost children and loved ones. The garden is dedicated to Yvonne for her fearless and compassionate devotion in bringing Jizo’s solace, comfort, and warm embrace to those in grief. Yvonne and Bill Sterling will be in attendance.

Chris Fortin, Sarah Emerson, and others continue to offer this ceremony at San Francisco Zen Center and beyond, as well as ongoing Jizo Ceremony Trainings for priests, chaplains and other grief professionals.

In conducting memorial ceremonies under the benevolent auspices of Jizo Bodhisattva, I have come to appreciate the capacity the Buddha Dharma gives us to accept what is painful and difficult. In Japan, Jizo is the much loved form of the Bodhisattva of the underworld; he is the emanation of compassion, which guides and protects transmigrators into and out of life.

My first encounter with Jizo happened in 1969 after a dear friend of mine died in a train accident in Japan. Several years earlier, my friend had gone on a search for himself, which ended at a Zen monastery. His sudden death was a blow and I grieved his passing deeply. Later that year I found myself driving Suzuki Roshi to Tassajara Zen Mountain Center from San Francisco. When I told him that I had been taking care of a footlocker holding my friend’s precious belongings (music, a flute, essays, books, and drawings), Suzuki Roshi suggested that we burn the belongings in the stone garden near his cabin at Tassajara. After a proper funeral and fire ceremony, we buried the ashes in the rock garden, and marked the spot with a small stone figure of Jizo. This, my first meeting with Jizo, affected me deeply. For some years afterwards, I could not explain my pull to the figure of this sweet-faced monk with hands in the mudra of prayer and greeting.

Subsequently, I began spending time in Japan and became reacquainted with Jizo. Figures of Jizo are everywhere there. I saw firsthand that Jizo ritual and ceremony involved not just graveyards and death in general, but particularly the deaths of infants and fetuses through abortion, miscarriage, or stillbirth. Back home, during the 1970s and 1980s, women had begun coming to me and asking if I could help them with their difficulties in the aftermath of an abortion or a miscarriage. In consequence, I began doing a simple memorial service for groups of people who had experienced the deaths of fetuses and babies. After many years of counseling both men and women I decided in 1991 to spend several months in Japan doing a focused study of practices around Jizo.

Initially, I did the ceremony only with women. But now I include men and children as well. Strangers assemble with their grief and unresolved dismay. Over time, I have been struck by how successfully the ceremony has provided a container for the process of acknowledging what is so, for encompassing what is difficult, and for bringing about resolution and healing. When I initially performed the Buddhist Memorial Ceremony, I followed a quite traditional form. Slowly I have modified and added to it in a way that seems to work better for Americans.