Since this was one of the themes of the 2019 Branching Streams Conference, inspired by Stephanie Kaza’s presentation, I invited groups to share their ways of responding to the climate crisis and heard back from six groups. 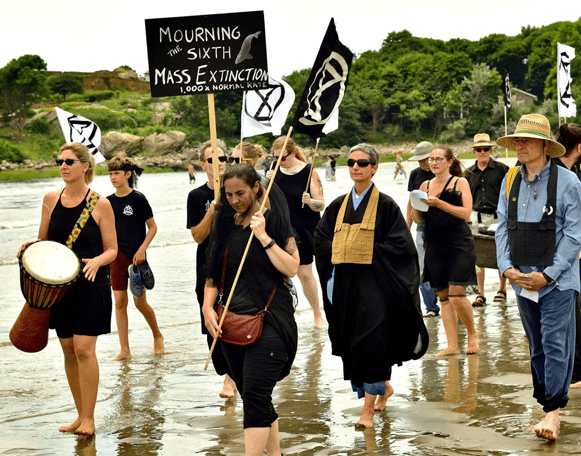 In 2019, Zen Center North Shore in Beverly, MA participated in:

A demonstration at the Boston Globe offices in Boston, where approximately 100 people gathered in the lobby, calling for the paper to inform “the public on the climate emergency at the level of urgency that was placed on reporting the Second World War,” and to scrutinize public policy “with respect to the scientific consensus on the scale of action required,” increase coverage of local environmental issues, and divest finances that are tied to fossil fuel corporations. (April 17)

“Funeral on the Beach” at Good Harbor Beach in Gloucester, to mourn the sixth mass extinction, we joined a procession in black to, sing and march through water and sand with thousands of onlookers. (August 4)

A march to the Brazilian consulate in Boston, we stood with the indigenous women of Brazil and their courageous efforts to protect their rights, their home, and our earth. (August 29)

Global Strike for Climate in Boston, we joined millions worldwide in a day of strikes from school and work to call for meaningful action on climate. (September 20)

“Flood the Seaport” in Boston, we joined hundreds of activists to close a bridge to traffic and display banners “declare a climate emergency.” (September 27)

Honk Parade in Somerville, a marching band and sign-carrying procession with Extinction Rebellion calling for meaningful action on climate. (October 12)

Links to newspaper articles about three of these actions:

Bamboo in the Wind, Sunnyvale, CA

Bamboo in the Wind Zen Center has launched our 2020 “Go Green in the Stream” Project that involves 2 classes in Green Buddhism, examing the teachings associated with going green (ethics, when is enough is enough; personal study of habitual patterns that destroy the environment and harm the health of all beings) coupled with practical tips to reduce single use plastic, limit chemical use, recycle, etc. We will offer a list of organizations that actively, promote sustainability, reduce waste, offer technology solutions for cleaning our oceans and so forth. We have started a webpage and hope to add to it with facts about the real problems facing our planet. 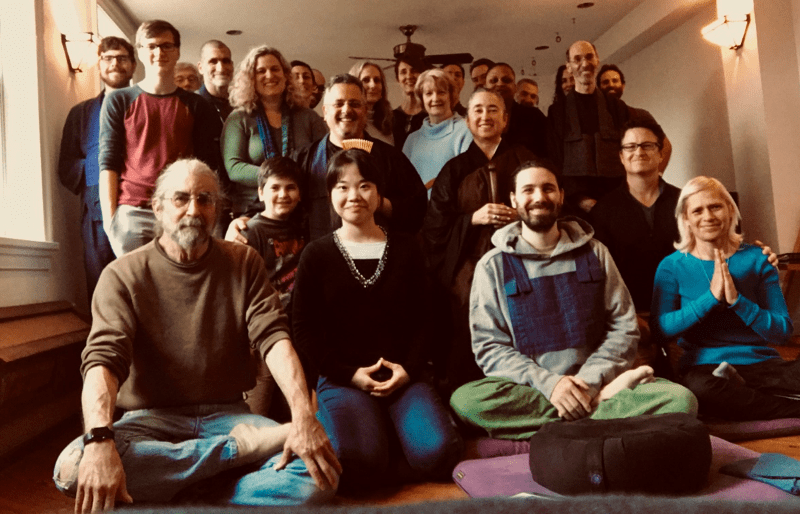 Members of All Beings Zen Sangha in Washington, DC, made the climate crisis the topic of their Fall 2019 Ango

The theme for the Fall 2019 Ango at All Beings Zen Sangha was “The Whole Earth is My Body.” In diffusing the boundary between the Earth and our bodies, Sangha members explored the harm being done to the planet as a result human (in)action(s) and made space to incorporate Zen practices to actively engage in healing the Earth through mindful interventions aimed at changing habits.

Early in the Ango, Sangha members watched a 2018 stop-motion film parable: “The Isle of Dogs,” written and directed by acclaimed filmmaker Wes Anderson. Set in a dystopian near-future Japan, the story follows a pack of banished dogs, led by street dog Chief who helped a young boy named Atari searching for his own dog after the species is banished to an island following the outbreak of a canine flu. The discussion after the film revealed Sangha members’ deep respect for non-human life forms and concern for the current state of our World on a number of different dimensions ranging from profound miscommunication to political corruption and environmental degradation.

To further our understanding of the systems and science of earth’s health we invited an outside expert Mike McClary, Esq. to help us with these three questions: (1) what is climate change, (2) how will it affect the world in the coming decades, and (3) what needs to be done to reduce its risks?

Many sangha members read Stephanie Kaza’s book “Green Buddhism.” Which is a beautiful meditation in essay form on various aspects of ecological awareness as it intersects with Buddhist practice. We had two gatherings to study three chapters (10, 11 & 14) of “The Avatamsaka Sutra” also known as the “Flower Ornament Sutra,” in which the Buddha teaches about the infinite interpenetrating co-arising of everything and the spiritual wisdom which sees the nature of the world.

Our studies lead to spirited discussions both during study periods and outside the zendo over meals and tea, to clarify aspects of the material presented and to better understand the magnitude of the degradation of the earth. We talked about: public policy, energy use, food systems, personal consumption patterns, systems theory, how do we as Zen practitioners face the realities, how do we engage with and impact these issues?

To stimulate Sangha members to explore small actions to halt further degradation of the Earth, we had two targeted three week-long habit changing challenges. We tried two strategies aimed at reducing single use plastic waste. The first challenge was refraining from using straws and using aluminum straws instead (or completely doing without straws). The second challenge involved casting aside single-use plastic eating utensils in favor of portable bamboo utensils. Several Sangha members reported adopting either or both habits permanently and we learned first-hand the importance of sharing our habits with the rest of the world as a way to create change around us. Also, some members decided to begin eating a plant-based diet. Many members voiced changes in their holiday consumption and purchasing habits and an awareness of focusing on wasting less and using pre-used items rather than purchasing new items.

Our taking a clear look together on “the whole earth as my body” and supporting each other in small and large efforts to improve our “care for the earth and thus ourselves” has enabled some of us to look toward the future with less unease and more hope for healing.

The Sangha of Kannon Do is pleased to announce our plans for solar panel installation on the roof of our zendo early in 2020. In addition to our commitment to the Earth, we feel this project will also encourage other non-profit institutions and private property owners to do likewise.

In January 2018, the first meeting of the Chapel Hill Zen Center Eco-Dharma Group was held with the mission to “informally explore together Buddhist teachings on the natural world, caring for the natural world as an expression of the Bodhisattva Vow, and our own responses to current environmental issues.

The intention of this group is to support and inspire one another in our efforts to make appropriate Buddhist responses to environmental concerns at a personal, local and global level.” Originally a discussion group, participants share articles, videos, and personal approaches to dealing with theenvironmental crisis and for staying connected to the natural world. We meet outside whenever possible, walk together on the trail around the temple, and are considering silent nature walks outside the temple grounds. And, sponsored by the group, we held the first CHZC outdoor half-day sitting in November 2019.

Some members also attended a recent climate rally together. Eventually the group began writing a regular entry for the CHZC’s newsletter and website covering subjects such as problematic materialsrecycling, hazardous waste disposal, and how to reduce packaging and materialism during the holiday season. A composting workshop, the first of a series of workshops on how to incorporate caring for the natural world into daily practice, is scheduled for early 2020. In addition, members of the group are considering doing the One Earth Sangha’s online Ecosattva training together and have begun learning about innovative methods to care for the temple grounds, such as mimicking a controlled burn without actually setting a fire to allow areas to evolve in a more natural way.

The Chapel Hill Zen Center Eco-Dharma Group gives people a place to share sorrows, fears, discoveries and successes, and is focused on responding to the climate crisis, both in discussion and action, grounded in the Buddha’s teachings and the Bodhisattva Vow to care for all beings in this “dewdrop world.” CHZC in general has a culture of being conscious and conservative in energy consumption, water consumption, recycling, food use practices, and how we use material goods. This is a direct result of our Abbess’ example and teaching.

Bodhisattvas do not turn away. This is the continuous practice and vow of the Dharma Heart Zen sanghas, Sebastopol and Cotati CA, an affiliate of the Everyday Zen Foundation.

The sangha’s many gardeners, beekeepers, naturalists, Jizo earth-womb makers, school-teachers, parents, grandparents, and on and on, wholeheartedly vow to meet the suffering of climate disruption, displacement of populations, and the degradation of our precious earth body with fierce, tender, and creative response.

From a sangha member: “Each week, (we) sit down with practitioners whose commitment to protecting the natural world arises from their deep understanding that we are not separate from this earth, but that, in fact, the minerals in our bones and the water in our blood is the earth itself…(together) we find the strength and courage to turn towards this terrible pain with determination and hope.”

We dedicate ourselves to the study of Ecodharma. Through the Everyday Zen Dialogs that I curate we ‘Walk for the Earth’ on the Green Gulch ridge that overlooks the cites, hills, gardens, forests, and bay—invoking the four directions, and offering chants and prayers for the wellbeing of the earth and for all beings.

We attend marches as individuals and as a sangha. We have visited and studied the oceans. We chant the Ecosattva vows and Shantideva’s Bodhisattva Prayer regularly. The sangha has begun sewing a rakusu with cloth made from recycled plastic as an expression of intent.

And along the way we become wiser and more compassionate in our actions of body speech and mind.

From a sangha member: “I have been turning my lifestyle away from consuming so much, and there is so much more to do. This is what I have been doing:

Together we can change the world, and sangha has never been a more important refuge and vehicle to awaken to and enact our interconnection with all of life. May we universally support each other to not turn away and to embody the Bodhisattva vow with and for all beings.